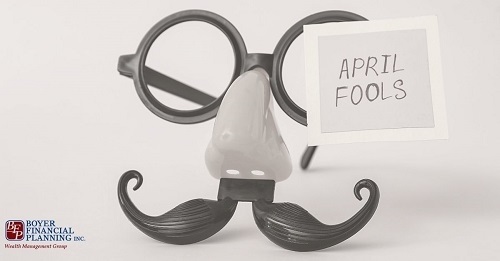 The History of April Fool’s Day

The History of April Fool’s Day

Long known as a day for pranks, the April Fool's holiday has a few possible origins[1] and has been celebrated in many countries for centuries. The holiday is typically marked by the delivery of practical jokes, at the end of which the practitioner then yells, "April Fool's Day!"

But the holiday has grown into such an event in some areas that corporations even play large April Fool's pranks. Though the origin is not completely known, one of the most common theories is that it came about with the New Year's Day celebration change.[2]

A popular attribution to April Fool's Day's formation is the transition from the Julian calendar to the Gregorian calendar in France in 1582. With the previous calendar, the new year was celebrated on April first, while the latter placed the new year on the now widely recognized date of January 1st. Those who forgot about the transition and would celebrate the week of the New Year the last week of March through the first of April, were termed April fools. They were also the subject of pranks. Often these pranks included the use of fish, which was a symbol of gullibility.

April Fool's Day as it is now more widely celebrated spread throughout the isle of Great Britain during the 18th century. Specifically, it is marked by a two-day long event in Scotland where people would send each other on phony errands on the first day. This first celebration is known as "hunting the gowk." The second day, known as Tallie Day, involved pranks involving placing signs and tails on passerby rear ends. As the practice moved to the colonies in the new world, the pranks expanded and were typically reserved for April 1st. [3]

While there have been several April Fool's Day pranks that have caught the public's attention through the years, there are a few that have been considered some of the greatest pranks of all time. One notable prank became known as The Great Spaghetti Harvest.[4] A broadcaster announced that Switzerland had a heavy spaghetti crop for the year and even showed footage of people harvesting spaghetti off trees. Another famous prank was the 1989 April Fool's Day UFO landing.[5] The founder of the Virgin Group piloted a hot air balloon and dressed in silver attire for a prank extraterrestrial landing. When they landed, they were so convincing that the police ran away when they were spotted.